Bill of Lading, B/L for short, is the most important shipping document in international trade. The content below shows B/L & definition, a sample B/L template with detailed explanation, and several related questions and answers you may have.

The following information will help you better understand this term, and make your ocean freight more smoothly. Let’s begin.

A Bill of Lading is a document issued by a carrier to a shipper of goods. It is a negotiable instrument, and it serves three purposes:

(i) it is a receipt for the goods shipped;

(ii) it evidences the contract of carriage;

(iii) it serves as a document of title (i.e. ownership).

(ii) Explanation: The contract between a shipper and the carrier is established when the shipper or their agent made a booking with the carrier (ocean shipping line and air shipping line) to carry the cargo from A to B. And the B/L is the evidence.

(iii) Explanation: Technically, it means that whoever is the holder of the B/L has the title to the cargo or the rights to claim the cargo.

The legal basis for Bills of Lading is known as the Hague-Visby Rules. It defines the obligations of the carriers (carefully load, handle, stow, carry, keep, care for, and discharge the goods carried” and to “exercise due diligence to … make the ship seaworthy) and the shippers (pay freight, pack the goods sufficiently well).

It’s complicated from a legal perspective. You can just define it as ‘a ticket for your goods’, and this ticket is necessary & important, that’s enough. 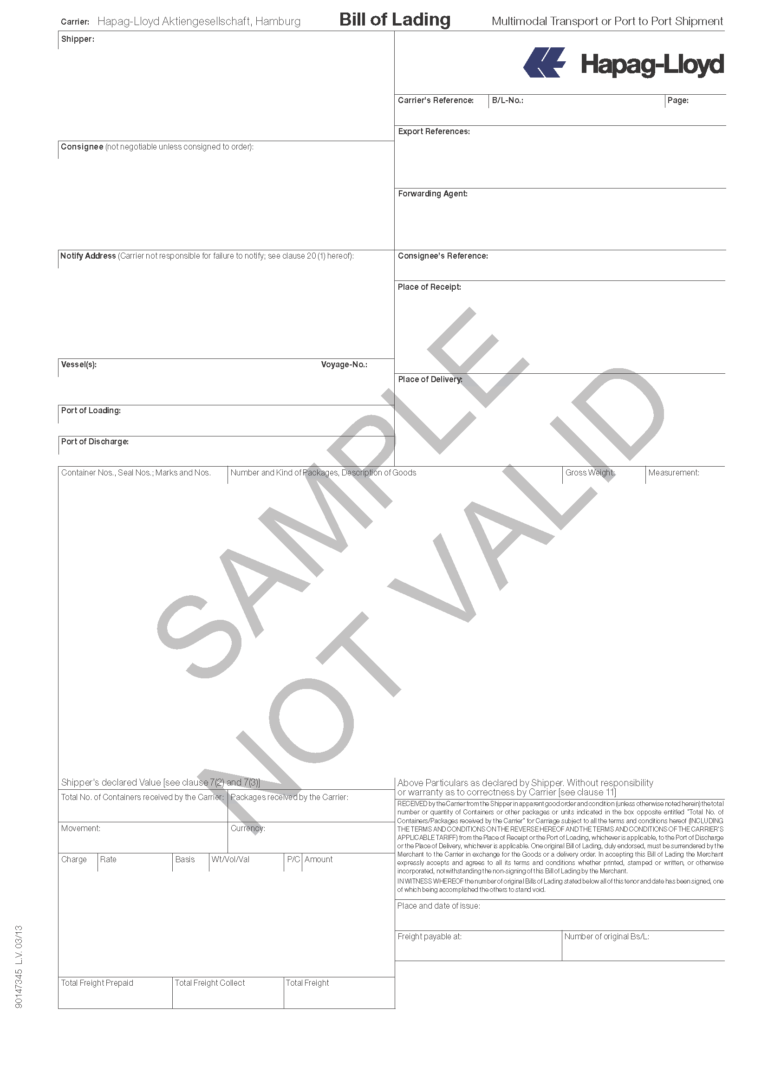 Please note that each shipping line or airline has their own B/L format, but the parts that need to be filled up are almost the same. Learning from this template form will be enough for you to complete or understand a B/L for your freight shipping work.

It’s the shipper’s responsibility to make sure the information listed on the B/L is the exact accurate and same as the buyer’s request. Let’s look into this form further one by one.

Shipper is the name and address of whom is shipping the cargo.

This may or may not be the actual owner or manufacturer of the cargo, but could also be a trader, an exporter or a freight forwarder. Someone who book space from the shipping line and pay the freight charges has the right to edit the shipper information.

Consignee is the name and address of whom is receiving the cargo.

This may or may not be the actual owner or recipient of the cargo as it could be a trader, an importer or a freight forwarder. Being named as the consignee on the B/L also comes with the risk and responsibility of being held accountable for many issues at the destination, such as non-clearance of cargos, late clearance, claims, or so.

I.e. if the destination is an Amazon warehouse, then

Notify Party is the name and address of the party who generally should be notified of the arrival of the cargo. Depending on the B/L, it can be different from the consignee.

Assume that there is an inland point which is connected to the mainland port by means of a vessel, the name of that vessel is shown here. Most times, it’s blank.

This is the place where the cargo is handed over by the shipper or the shipper’s freight forwarder to the carrier/shipping line. If this area is filled, it is assumed that the carrier has done the movement from here to the Port of Loading and if there any incidents or damages to the container or cargo between the Place of Receipt and Port of Loading, the liability will be that of the carrier.

This is the place from which the container or cargo is loaded by the carrier onto the nominated ocean vessel.

This is the place at which the container or cargo is discharged by the carrier from the nominated ocean vessel.

Please note if there is a Place of Delivery shown in the B/L, the carrier will not allow the consignee to take delivery of the container or cargo at the Port of Discharge and move it to the Place of Delivery.

The shipper marks his packages with some information identifying the shipment so that the consignee can know what the shipment is.

Please note that Marks & Numbers play a much more important role in LCL freight than FCL freight. It’s necessary information for LCL, since the shipments combined in one container and belonged to different consignee. You can click here to find more related information about FCL/LCL shipping.

Besides, the container / seal No. also shown here by the carrier.

11. Number and Kind of Packages

Here the number of packages that are packed in FCL or LCL. Example: 20 pallets, or 10 cartons. Learn more about cargo packaging.

This area is used to describe exactly what cargo is being loaded in the container or LCL.

In addition to Gross Weight, there is a column called Chargeable Weight in an Air Waybill. You can click here to find more.

It’s usually shown on the upper right corner. With the information, you can easily track and trace your shipments from the official website of the carrier.

These numbers have the format XXXX123456789…Generally, the first 4 letters are the carrier’s SCAC Code (such as COSU – COSCO, MSCU – MSC), then followed by several numbers, which could be 8 digital or 10 digital.

The shipping carrier also lists some other information, including but not limited to:

The carrier’s terms and conditions are also printed on the B/L. If you are interested in the details, click here to view the pdf file from Hapag-Lloyd.

By mode of transport:

Telex Release, aka Express Release, means a message that is sent by the shipping line or their agent at loading port to their office or agent at destination port advising that, the shipper or exporter has surrendered one or all of the original bills of lading that have been issued to them, and that the cargo can be released to the consignee shown on the B/L without presentation of any original bills of lading.

This is a method to speed up documentation delivery. But please note:

1. Shipper applies for electric B/L from the freight forwarder, and issues the electric guarantee paper, indicates that all the consequences and responsibilities of the electric B/L are undertaken by the shipper.

2. Then freight forwarder asks the shipping company for electrical B/L issuing, and provides the guarantee paper.

3. The shipping company receives the B/L application and guarantee paper therefor inform the destination port, to allow this shipment can be used electric B/L instead of the original B/L.

4. The shipping company issues the electric B/L or to the freight forwarder, or an email receipt forwarded. It depends on different carriers.

The evidence can be the email receipt or an electronic version of B/L showing surrendered or telex released. Then the consignee can show this evidence to the carrier’s branch or port agent at the destination, instead of the original paper B/L.

Q: How do I choose: Original vs Telex Release?

We suggest try to express release every shipment if possible, though release fee is higher than courier cost for the original delivered from China to your country. Your Chinese supplier will cover either of them based on FOB.

1. Release at the loading port is faster, especially the destination is not far away, such as Japan, Korea, Southeast Asia, West Coast of America. There’s not much sufficient time for a courier delivery in some cases.

2. Release at the loading port is safer. It’s very annoying when the original has lost during the transit. A new set of originals can be obtained from the carrier, but the process is so complicated. It cost both time and money.

Q: What is B/L endorsement?

If the consignee listed on the B/L shows the straight company, no needs for an endorsement.

The short answer of distinguishing Master B/L and House B/L is to find out which party is issuing the B/L.

You can find the carrier’s logo on all Master B/L. The shipping lines and airlines are well known and easy to identify.

Please note that all LCL and almost all combined transport use House B/L.

Q: What’s the difference between Master B/L and House B/L?

The real shippers and the carrier don’t have a direct contractual relationship. You have to face the issued party and pay them at the destination. Sometimes, you have to pay more confused charges in House B/L. Because they are not as official as the shipping lines or airlines.

But House B/L has its own advantages. You can use HB/L for freight collect, privacy protection or anti-dated.

Q: How long can I get my B/L if importing from China?

The carriers will issue the B/L once the vessel has actually departed from the loading port, which means the same day as departure.

It will take 1 or 2 days to your supplier. Then 2~5 days international express to you.

What we are talking about is original B/L. If telex release, you can get the electronic version as soon as the vessel depart.

Q: Can I have more than 3 original Bills of Lading?

Although 3 is the accepted industry standard, the carriers can issue as many originals as you require as long as the face of the ladings bears the number of originals issued. (i.e. if you require 5 originals, then the originals must state that 5 were issued).

Q: What does full set of clean B/L mean?

Frequently issuing banks put a phrase like “full set of clean shipped on board ocean bills of lading” on a letter of credit text under field 46-A Required Documents.

Full set: carriers issue bills of lading in a set of 3 original and 3 copies as an established tradition for decades. You should act according to letter of credit rules when you encounter such a phrase in a letter of credit.

Clean: indicating that the goods were received by the carrier in good order and condition, without any clauses declaring a defective condition in the goods and/or their packing.

Q: Who verifies the B/L and keep the information same as the actual shipments?

Nobody else except the shipper themselves.

The shipper provides all the data needed on a B/L. When a container is loaded and locked by the shipper, it will be kept closed, unless there’s an inspection by the Customs. We know the inspection ratio is very very low. So at most times, all the information is just the same as the shipper said, because no one has the chance to open a container and see what’s actually in there.

It’s a safe method for cargo shipping. On the other side, few shippers will scam the buyer by this way.

Do you have some questions about this shipping document? Or any international transportation and logistics needs? As an experienced China freight agent, we are always ready for your inquiry. Feel free to drop a note.

Importers bring in peak season goods early to get ahead of possible delays.

The ultimate step-by-step ebook about sourcing from China, especially for U.S. importers [2022]